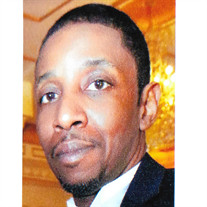 Andre Keith Mitchell Sr. was born to Clifton S. Mitchell and Margaret Kelly Mitchell on October 7,1970 and passed away on August 18,2017. During Andre's formidable years he enjoyed life,his first educational experience was at Lansdown Friends School. This was where he developed his free spirit. Later he attended public school in both Delaware and Bucks counties finishing at Pennsbury High School. Andre loved his family, he had a contagious, fun, personality and he loved to laugh. He worked hard at whatever he did, always with the goal of trying to provide for his family anyway he could. Andre was grateful for the management and co-workers at TriState for all their love and support. While undergoing treatment Andre dreamt of restarting his trucking business which he named MTStransportation. He had designed his own logo and business cards to match, he made many contacts. Andre may not have accomplished all the things he set out to do, but he gave it his all. When you met Andre he made you feel like you had known him forever. Children of all ages,whether at the playground, football field or AAU basketball enjoyed being in his presence. He enjoyed nurturing and mentoring them. To some Andre was known as "Chicken Wing", There are different stories about how he obtained that name, However Andre never ran track in school, but he loved to run! Andre was a great son, grandson, husband, father, brother, nephew, cousin, stepson and good friend to so many others. He will be greatly missed. He leaves behind family and friends to cherish his memory He is survived by his wife Turkeshua, son Andre Jr. and two daughter's Ajah and Aniya, Grandmother Margaret Kelly, brother Bryan(wife Crystal), Jeremy(wife Jennifer) and stepmother (Charmaine Mitchell) and many nephews and nieces and friends that loved him dearly.

The family of Andre K. Mitchell, Sr. created this Life Tributes page to make it easy to share your memories.

Send flowers to the Mitchell family.