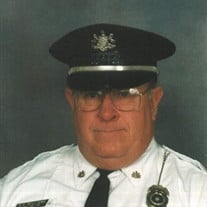 Bruce G. Williams, age 77, of Levittown, PA, passed into the arms of his blessed Saviour on June 26, 2019. He was born in Trenton, NJ and lived in Allentown, NJ before he moved to Levittown, PA as one of the original families. Bruce graduated from Wilson High School in 1960 and attended Millersville University from 1960-1961 and then graduated from Philadelphia College of Bible (now known as Cairn University) evening school diploma program in 1967. He was a believer in Jesus Christ and attended Oxford Valley Chapel in the 1960's and then Calvary Baptist Church from 1973 until the time of his passing where he was an audio/visual tech for a number of years. In 1970 he was a founding board member, serving as treasurer for many years for the Lower Bucks Christian Academy. Bruce also was a member of Newportville Fire Company and was the past Fire Police Captain and Lieutenant and also served for a time as fire police chaplain for Bucks County. He continued a family legacy of emergency service volunteer work, started by his parents who were past chief and nurse in the 1950's for the Bucks County Rescue Squad and previously with the Allentown, NJ Rescue Squad which his parents helped establish. He had a passion for theatre pipe organ music as well as southern gospel music, carousels and enjoyed Hallmark movies and inspirational romance novels, especially of the Amish genre. Bruce will be deeply missed. Bruce is predeceased by his beloved of 51 years, Mary Conley Williams, his parents, William Williams and Marion Williams (nee Conrad) and his sister Marsha Miller He is survived by his children, Kimberly Boxmeyer (Paul), Kerry Carter, Kevin Williams (Celeste) and Kristy Kerner; grandchildren, Kiri Scheiderich (Samuel), Hannah Carter, Nathaniel Carter, Zachary Kerner, Chase Kerner; and Cosette Kerner. A niece Karen Courtwright and nephew David Miller Relatives and friends are invited to attend his visitation on Saturday, July 6, 2019 from 9am-10:30 am at Calvary Baptist Church, located at 250 Green Ln., Bristol, PA 19007. A funeral ceremony will begin at 10:45am at the church. Interment will follow at Bristol Cemetery. In lieu of flowers contributions may made to either the Newportville Fire Company or the Calvary Baptist Church.

Bruce G. Williams, age 77, of Levittown, PA, passed into the arms of his blessed Saviour on June 26, 2019. He was born in Trenton, NJ and lived in Allentown, NJ before he moved to Levittown, PA as one of the original families. Bruce graduated... View Obituary & Service Information

The family of Bruce G. Williams created this Life Tributes page to make it easy to share your memories.

Send flowers to the Williams family.