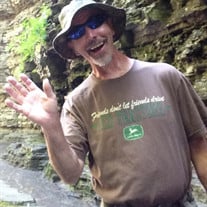 On August 19, 2017 Carl K. Brady (52) of Bristol, PA, passed away peacefully at home, surrounded by loved ones, after a valiant, decade long, battle against cancer. Carl was born and raised in Bristol, PA and graduated from Bucks County Technical High School. He worked as a diesel mechanic for Balford Dairy Farms since graduating high school. He was a member of Local Teamsters 463 and a former member of the William Penn Fire Department, Shenandoah,PA. Carl shared his passion for hunting, fishing, camping and all things outdoors with his son, his pride and joy, Collin (16), at home. On countless occasions, the two of them could be found in their garage "putzing" on one project or another. Carl was also involved with Collin's Boy Scout Troop #316, and was an avid supporter of For Pete's Sake and Gilda's Club charities For the past five years, Carl, his "partner in life and in life's adventures" and love of his life, Fran Domitrowski from Hillsborough, NJ, and Collin have been jumping from one adventure to the next - cruising the Caribbean, sailing in Maine, hiking Death Valley and the Red Rock Canyon, biking in Cape Cod, fishing at the Jersey shore, various PA rivers and in Canada, and even a three week trip to Japan to visit Fran's US Marine son, Kyle. Carl was predeceased by his wife Terri (Thompson) Brady and his father Carl W. Brady, both in 2010, and his mother Martha "Mae" Brady in 2015. He is survived by Collin, Fran, Fran's sons Tim and Kyle, his sisters: Rene' F. Hartman (Matt) of Bensalem, Michelle Black of Levittown, and Danielle McGinley (Tim) of Bristol, his nieces and nephews Zachary, Hannah, Shane, Dawson, Kylie Mae, Paitynn, and Skylar, as well as in-laws, cousins, aunts, uncles and too many dear friends to list. Relatives and friends are invited to attend a viewing at the Molden Funeral Chapel, 133 Otter Street, Bristol, PA on August 22, 2017from 4pm to 7pm and August 23, 2017 from 10am to 11am. A Christian service, officiated by Pastor Dave Hill from the Neshanic Reformed Church, Neshanic, NJ will be held at the funeral home at (time). In lieu of flowers, donations in Carl's memory can be made to Gilda's Club, 200 Kirk Road Warminster, PA 18941, or For Pete's Sake Cancer Respite Foundation, 620 West Germantown Pike, Suite 250, Plymouth Meeting, PA 19462. Cremation is private.

On August 19, 2017 Carl K. Brady (52) of Bristol, PA, passed away peacefully at home, surrounded by loved ones, after a valiant, decade long, battle against cancer. Carl was born and raised in Bristol, PA and graduated from Bucks County Technical... View Obituary & Service Information

The family of Carl K. Brady created this Life Tributes page to make it easy to share your memories.

Send flowers to the Brady family.