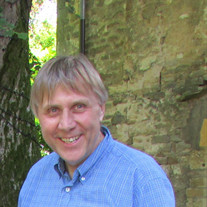 Carl Louis Marcinik, age 58, of Southampton, PA passed away peacefully on August 9, 2017. He was born to the late Carl and Margaret (nee Hauer) Marcinik in Latrobe, PA. Although he moved to New Jersey at an early age, his love for the rolling hills of Western Pennsylvania stayed with him all his life. Carl proudly served in the US Air Force from 1979-1982. As a very young man, he became a single father facing the formidable task of raising three young children on his own. Around this time, he became a believer and follower of Jesus Christ. His early Air Force training had led him into the computer field. He worked in various positions throughout the years and eventually as an independent consultant doing software engineering. However, Carl considered earthy knowledge and career pursuits as nothing in comparison to pursuing Jesus Christ. A verse that he could often be heard quoting was 1 Corinthians 2:2- " For I determined not to know anything among you but Christ, and Him crucified". Carl felt led to serve the Lord overseas as a missionary and lived both in Hungary and France while seeking to point others to the grace of Jesus Christ. Carl became involved with Calvary Chapel of Philadelphia almost from its start. Along the way he was also used to encourage many others in various denominations and in various places throughout the world. He dedicated his life to glorifying Jesus Christ. He was willing to travel anywhere to serve the Lord. Carl will be deeply missed. Carl is survived by his wife of 27 years, Sharon Marcinik (nee Haas); children, James Blake, Matthew Marcinik, Melissa Huff, Joel Marcinik, Joshua Marcinik, and Sarah Marcinik; siblings, Roger Marcinik, Carol Young, Peggy Marcinik, and Tommy Marcinik, 6 grandchildren; and many loving nieces, nephews, and friends around the world. Relatives and friends are invited to attend his memorial service on Saturday, August 12, 2017 at 1:00 with receiving line from 12:00-1:00 at Calvary Chapel of Philadelphia, located at 13500 Philmont Ave, Philadelphia, PA 19116. In lieu of flowers, memorial donations can be made to Calvary Chapel of Philadelphia. Feel free to post photos, share a memory, or send an online condolence to the family.

Carl Louis Marcinik, age 58, of Southampton, PA passed away peacefully on August 9, 2017. He was born to the late Carl and Margaret (nee Hauer) Marcinik in Latrobe, PA. Although he moved to New Jersey at an early age, his love for the rolling... View Obituary & Service Information

The family of Carl L. Marcinik created this Life Tributes page to make it easy to share your memories.

Send flowers to the Marcinik family.