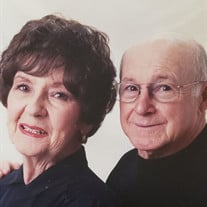 On Wednesday, April 14, 2021 Jeanne Saunders (Wilson) passed away peacefully with her family by her side. She was joined by her loving husband of 70 years, Charles Saunders, on Monday, April 19, 2021. In Life and in Death, they chose one another for all eternity. Charles (Nick) Saunders, an Army Corporal during the Korean War, spent his working life at The American Dredging Company followed by Warner Company alongside his father. A dedicated, hardworking man that continued employment in the Sam's Club Bakery years after retirement finally called it quits at the young age of 81. A true Patriarch, known to many as "Poppy," he was a simple man, devoted to his family. He found enjoyment for many years coaching his boys in both baseball and football and was also a member of the Lower Bucks Greater String band where he was Co-Captain for many seasons. His true love was fishing, and he spent many days alongside his son Scott at Penn Warner lake. Jeanne Saunders (Wilson), a true feminist and devout patriot, spent her working life as a secretary at Kaiser Aircraft followed by 36 years year's supporting the late Dr. Richard E. Strauss of Bristol as his Office Manager. She was an avid reader and lover of the theater, arts and education. She starred in many plays, singing and touring with her theater group. She continued this passion while her children were in school, performing with Stage Crafters where she met many of her lifelong friends. She was also the President of their PTO. Their love story portrays a never-ending bond between two people for all to admire. Their adoration for one another embodies the true meaning of marriage. Having met in High School, where Charles was the President of his Pennsbury Senior Class as well as a star baseball player and Jeanne a cheerleader and Captain of the basketball team in Lower Moreland, their lifelong love story began. They were married in 1951 following Graduation and settled into the Bristol/Levittown area where they started their family and maintained lifelong residency. As a couple, Nick and Jeanne spent their lives together building their family, friendships and supporting their community. They loved traveling, embarking on many cruises and enjoyed spending time relaxing in their summer home in the Poconos with friends for many years. Their grandchildren were the light of their life and weekly sleepovers were the norm. As many know, Christmas was/is larger than life with the Saunders Family. Celebrating, decorating and baking have been established traditions for many years. Spanning over multiple generations, these memories will forever be alive in our hearts. Never wanting to be apart, they spent their last days sharing meals, holding hands and spending time with their family. They were inextricably part of each other's final story. Charles and Jeanne were preceded in death by their eldest son, Charles (Biz) Saunders, Jr. They are survived by their Son, Scott Saunders (Patricia) and Daughter, Colleen Neumann-Snedeker (Drew). Their Grandchildren Heather Richiez (Eliezer), Scott Saunders Jr. and Travis Snedeker as well as Amanda, April and Andrew of Florida and their littlest loves, Great Grandsons, Rohnan and Ryland Richiez. Additionally, their beloved Parrot Katy Girl of 36 years. Our Family has found comfort knowing they are together alongside many friends and relatives that have preceded them in death. In support of their wishes, services will be private and a Celebration of Life will be scheduled for friends and family in the near future.

On Wednesday, April 14, 2021 Jeanne Saunders (Wilson) passed away peacefully with her family by her side. She was joined by her loving husband of 70 years, Charles Saunders, on Monday, April 19, 2021. In Life and in Death, they chose one another... View Obituary & Service Information

The family of Charles T. Saunders created this Life Tributes page to make it easy to share your memories.

Send flowers to the Saunders family.