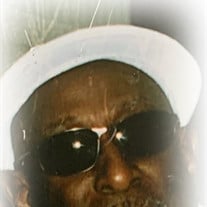 On Sunday, March 14, 2020, our father, Clinton Jones, departed this life to go home to be with his Heavenly Father. Son of the late, Will Jones, along with his devoted mother, Illa Pace and stepfather, John C. Pace. He was born in Rockingham, NC and came to Bristol, PA as a young boy. He was a graduate of Delhaas High School in Bristol and was a champion wrestler on the Delhaas High School wrestling team. Clinton worked many odd jobs before relocating to Boston, MA with his young family. Upon getting settled in, he found work at Massachusetts Bay Terminal Authority where he drove a bus for the city. He worked there for 27 years until his retirement and later he returned to his beloved Bristol, to live out his life among his family and close friends.He was also a proud member of the Elks in Bristol for over 50 years. Our father was well-known to many in Bristol Terrace and the surrounding area, he was always lending a helping hand and giving a listening ear to whomever needed it. His favorite pastime was playing pool with his close buddies, Rufus Johnson and Wendell Miller aka "Winkie". He loved being at cookouts at his niece, June Debois' house where everyone would gather and socialize, having fun during the summer months. Our father loved to be with his grandchildren. He shared a special bond with Giavanni Jones, whom he raised as his own from a baby; you would not see him if you did not see her and you could bet money on that. He was a caring, loving and giving uncle to his nieces: June and Joan Debois, Flossie McQueen, Blossom Jones-Tull and Ann Watts. He shared many days and nights sitting around just talking with his nephews, Turner Rogers and Joe Louis. Our father was the wind beneath our feet and was the kind of father anyone would have loved to call their own. He was kind, generous and loving to all whom met him. Our ROCK is gone to be with The Lord, but he will always remain embedded in our hearts until we meet again. Our father is preceded in death by: his precious daughter, Vicky Jones; his father, Will Jones; his devoted mother, Illa Pace and stepfather John C. Pace; two brothers, Willie Jones and Luther Jones; five sisters, Carrie Rogers, Marie Sapp, Vera Debois, Earlene Jones and Mookey; and three uncles and three aunts. He leaves to mourn his passing: his children, Michelle Jones (Wayne) of Philadelphia, PA; Glenn Jones (Cherry) of Trenton, NJ; Waldel Jones (LaShundra) of Bristol, PA; Erick Jones (Theresa) of Scranton, PA and Dennis Jones (Amanda) of Boston, MA; his brother-in-law, Mack Debois; his 19 grandchildren, 10 great-grandchildren and a host of nieces, nephews, other relatives and friends. Family and friends are welcomed to his visitation on Friday, March 19, 2021 from 10:00am-11:00am with service at 11:00am at Molden Funeral Chapel and Cremation Services, 133 Otter Street, Bristol, PA 19007. Burial to follow at Bristol Cemetery. Visitation services will be held in accordance with COVID guidelines, therefore limiting individuals within the facilities. Due to the overwhelming support and love for Clinton, we ask to please be considerate of the family and others wishing to pay respects.

On Sunday, March 14, 2020, our father, Clinton Jones, departed this life to go home to be with his Heavenly Father. Son of the late, Will Jones, along with his devoted mother, Illa Pace and stepfather, John C. Pace. He was born in Rockingham,... View Obituary & Service Information

The family of Clinton Jones, Sr. created this Life Tributes page to make it easy to share your memories.

Send flowers to the Jones family.