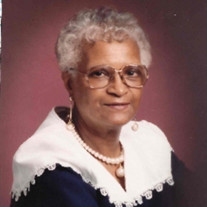 Cordelia J. Scudder was born in Princeton, NJ, the fifth of eight children on July 26, 1926 to Barnes and Theodosia Wells and departed on February 7, 2019. She was preceded in death by three of her children: Roger, Lorn, and Philmore Jr., a grandchild, Tara and her husband of 48 years, Philmore Senior. Cordelia was an enthusiastic, loyal and faithful member of Bethel A.M.E Church of Bristol where she occasionally served as the chairperson for her church's annual Women's' Day. She also served on the stewardess board, sang in the choir, taught Sunday school, served as Sunday school superintendent and baked apple pies by the dozens, if necessary, in support of church functions. She was ordained a deaconess within her church by the 197th Session of Philadelphia Annual Conference. First Episcopal District African Methodist Episcopal Church in May of 2013. Cordelia enjoyed sports and was an avid bowler having won a trophy nearly half as tall as she was. She really liked baseball and would talk at length with her friend Marrilee Long about the Phillies. She went on long camping trips with her husband and sons going as far as Mount Rushmore in South Dakota. She even managed to visit her son stationed in Japan with the United States Air Force where she found the time to make and share her apple pies. Cordelia was born into what has been called America's "Greatest Generation" having been just fifteen years old when the United States entered World War II in December of 1941. Although she never graduated from high school, leaving after her junior year to have her first child in 1943, Cordelia managed to educate herself in school of compassionate human interaction. She was always willing to learn and to help in whatever capacity she could. She worked at Lower Bucks County Hospital in housekeeping department and later on at Planned Parenthood. Cordelia is survived by three sons USAF Senior Master Sergeant, retired Arthur J. Scudder and his wife Cynthia of San Antonio, TX, Dr. Leroy M. Scudder-Davis and his wife Dr. Marilla of Paint Lick, Kentucky; David S. Scudder and his wife Amy of Bristol, Pennsylvania, six grandchildren: Timothy L. Scudder and his wife Tricia of Colorado Springs, Colorado; Kia L. Scudder of San Antonio, TX ; Morgan L. Scudder-Coakley and his wife Laura of Leicester, England; Barry W. Scudder-Davis of Jamaica Plain, Massachusetts; Jadon T. Scudder of Bristol PA; Kenan J. Scudder of Bristol, PA; one great grandchild: Parker J. Scudder of Colorado Springs, Colorado and a host of nieces, nephews, and friends. A funeral service will be held at 6 pm, on Friday, February 15, 2019 at Bethel AME Church 254, 260 Wood St, Bristol, PA 19007. A viewing will be held from 5 pm until the start of the service at church. Burial will take place at 10 am, on Saturday, February 16, 2019, at Whitemarsh Memorial Park, 1169 Limekiln Pike, Ambler, PA 19002. Arrangements entrusted to and condolences for the for family may be left at www.moldenfuneralchapel.com

Cordelia J. Scudder was born in Princeton, NJ, the fifth of eight children on July 26, 1926 to Barnes and Theodosia Wells and departed on February 7, 2019. She was preceded in death by three of her children: Roger, Lorn, and Philmore Jr., a... View Obituary & Service Information

The family of Cordelia J. Scudder created this Life Tributes page to make it easy to share your memories.

Cordelia J. Scudder was born in Princeton, NJ, the fifth of eight...

Send flowers to the Scudder family.