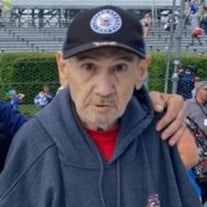 George Henry McGuigan, August 6, 1946-August 15, 2021, Survived by: his only son, Brian Pinch/McGuigan, his only grandson, Brian McGuigan Jr., his daughter in law, Colleen Aurelia, his sister Kathleen Ehrgood and her husband Charlie, his brother John McGuigan, his niece Shannon McCall/Storms, Raymond Storms, his nephew Thomas McCall and 5 great nieces. Predeceased by: his parents Angelina Manes/McGuigan and George McGuigan Sr., also by his brother, Thomas McGuigan, who passed away at 18. George was born in NJ, moved often, and resided in the Levittown, Bristol, Croydon area. He joined the Navy, and, was an honored Vietnam Vet. He worked for US Steel. George was an adorable, grumbly man. He was one of the good guys! A Vietnam Vet. That was loved by his family and friends. He was a hard-working, responsible kind hearted, generous, funny, womanizing flirt who gave up everything he had for everyone else. He enjoyed taking chances, and, trying to win big at Parx casino. He was a party waiting to happen. He was a man of honor. A gentleman. He was a respectable, strong, independent survivor through life's ups and downs. Blessed in 1971 with his only son Brian, and, his only grandson Brian Jr in 2003, who carries on the family resemblance, and, looks just like him. George was able to attend his very first Nascar race in June with his family. Him and his son both referred to the day as one of the best days of their lives! Unfortunately, He suffered horribly and died as a result of Agent Orange. He was taken from the people who love him too soon...we were not ready yet! We needed 20 more years and 100 more Car races, casino trips, and buffets to enjoy together.... When we meet again Dad! You don't have to struggle anymore, time to rest in peace. We love you so much! To know George was to love George. He had a tough exterior, and, a nurse come commented that George was just a pussycat. His son, Brian, said "is that true Dad? You're just a pussycat?" George replied, "I'm not a pussycat, I'm a maniac". He was truly one of the Good Guys and will be deeply missed. Services are on Wednesday, September 29, 2021 at 1:00pm with Military Honors under the pavilion at Washington Crossing Cemetery, 830 Highland Road, Newtown, PA 18940.All who loved this amazing man are welcome to attend.

The family of George H. McGuigan, Jr. created this Life Tributes page to make it easy to share your memories.

Send flowers to the McGuigan family.