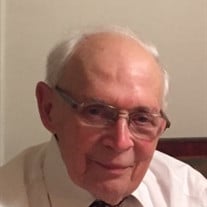 George Molden, Jr. of Newtown, PA passed away Thursday, January 2, 2020 at Chandler Hall. He was 94. Born in Bristol, PA he was the son of the late George and Elizabeth Morgan Molden. He was a lifelong resident of Bristol, PA before moving to Newtown three years ago. He was a graduate of Bristol High School and was Valedictorian of the Class of 1943. He was a Veteran of WWII serving in the Navy in the Pacific Theater. He then returned and received his bachelor’s degree from Ursinus College and his diploma from Dolans School of Mortuary Science. He was a licensed funeral director owning and operating his family’s business, The Molden Funeral Chapel proudly serving the families of the community for over 60 years. He was a member of many organizations including the Bucks County, Pennsylvania and National Funeral Directors Association, the American Legion Robert Bracken Post, The Odd Fellows, and The Exchange Club of Bristol. He was also a member of the Fairless Hills Masonic Lodge and the First United Methodist Church of Bristol. He also served as a Director of Fidelity Savings and Loan Association of Bucks County for over 30 years, retiring in 2014. George was known for being a fair and compassionate Funeral Director who devoted his life to serving his families and community. Most importantly he will be remembered as a wonderful husband, father and grandfather. In addition to his parents, he was preceded in death by his wife of 61 years, Virginia Boone Molden and is survived by two sons, Steven D. and wife Kathleen E. of Leland, NC and Christopher M. and wife Sandra A. of Newtown, PA., four grandchildren, Melissa Lawrence (Roderick), Craig Molden, Jason Molden (Betsy) and William Molden and 5 great grandchildren, Reagan, Rory, Brinton, Chelsea and Ashton. Family and friends are invited to attend his viewing on Wednesday, January 8, 2020 from 11:00 am until his service at 12:30pm at the Molden Funeral Chapel and Cremation Service 133 Otter St. Bristol, PA. A private interment will be held at Elan Memorial Park Bloomsburg, PA. In lieu of flowers, contributions may be made to Chandler Hall Hospice 99 Barclay St. Newtown, PA 18940 To Sign the online guestbook or send a condolence visit www.moldenfuneralchapel.com

George Molden, Jr. of Newtown, PA passed away Thursday, January 2, 2020 at Chandler Hall. He was 94. Born in Bristol, PA he was the son of the late George and Elizabeth Morgan Molden. He was a lifelong resident of Bristol, PA before moving... View Obituary & Service Information

The family of George Molden Jr. created this Life Tributes page to make it easy to share your memories.

Send flowers to the Molden family.