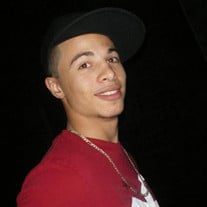 Addiction isn't prejudice, and it does not discriminate and sometimes it gets people with the purest hearts and the brightest futures. Ignacio Gonzalez, lovingly known by his family as Iggy, lost his battle with addiction on Friday, April 13, 2018 at age 25 Iggy was born at Lower Bucks Hospital on July 11, 1992 He lived in Levittown, most of his life. He graduated from Pennsbury High School Class of 2010. Iggy spent countless hours working on his 1997 Mustang, his car was his pride and joy. He loved his German shepherds Kazzy and Iggy He was the man of the house, his brothers best bud, my handyman. Iggy worked at Philadelphia Parx Racing as a groom. Iggy also enjoyed spending time with his horse Chakoyta and riding on nice days through the park with his mom and friends at the stable. Iggy was an amazing person, so intelligent, giving and kind. He was the life of the party; his smile was contagious. He is survived by his mother, Maryann and her companion David; and siblings, Felicia, Robert and Kenzie.He will be missed by his longtime girlfriend Olivia, as well as his grandma, aunts and uncles, cousins, and niece and nephew. I know you are in heaven on the streets of gold racing your mustang, making everyone laugh or in the wide-open pastures watching the horses graze and the dogs run, or fishing on the banks of the purest waters. Until I get to see you again Son, know you are loved by us all. We are not mad at you. Our only regret is we couldn't save you. Take care of pop-pop and little grandma. Don't get into too much trouble with Chencho. Family and friends are invited to attend his celebration of life with us on Tuesday April 24th, 2018 from 6pm-7pm at Molden Funeral Chapel and Cremation Service. A memorial service will begin at 7pm at the funeral home. Feel free to post photos, share a memory, or send an online condolence to the family.

Addiction isn't prejudice, and it does not discriminate and sometimes it gets people with the purest hearts and the brightest futures. Ignacio Gonzalez, lovingly known by his family as Iggy, lost his battle with addiction on Friday, April 13,... View Obituary & Service Information

The family of Ignacio Iggy Gonzalez created this Life Tributes page to make it easy to share your memories.

Addiction isn&#39;t prejudice, and it does not discriminate and sometimes...

Send flowers to the Gonzalez family.