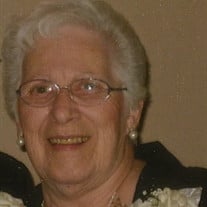 Jean Louise Dahms (Swayne) passed away Saturday, December 21, 2019 surrounded by her loved ones. She was 88 years old. Jean was born January 18, 1931 in Pennsauken, New Jersey, in the home owned by her parents, above the family's hardware store. Her family later moved to Ocean City, New Jersey where they ran a concession stand on the boardwalk. Jean graduated Ocean City High School with the class of 1949. It was in that same year that she began her life as a wife, mother, and working woman. Ultimately becoming the mother of eight children, she took on many jobs over the years. In addition to working at the family concession stand, she worked variously as a cashier, a bartender, and later retired as a shop steward from Red Rope Industries in Bristol. As a retiree, she also worked at her local Wawa. She was a skilled seamstress and crochetier, making countless Christening gowns, Christmas dresses, Communion dresses, Prom dresses, and even Wedding gowns for her children and grandchildren. In her spare time, she enjoyed a good family game night: playing Scrabble, gin rummy, and pinochle among other things. In her quiet time, she liked to read, watch Jeopardy, put together jigsaw puzzles and listen to opera. To the chagrin of her family, she was also an avid fan of the San Francisco 49ers. She was the loving wife of the late Donald E. Dahms. She was also predeceased by her first husband, Vincent Robart, as well as her parents William Townsend Swayne and Louise Swayne (Eichel), her brothers William and Thomas, her sisters Clarissa May, May Fry and Naomi Mallory. Jean is survived by her loving children, Dawn Robart, Glenn Robart, Thomas Robart (Judy), Cheryl Romaniello (Anthony), Teressa Peters (Thomas), Lisa Robart (Bennie Mason), Michelle Dahms and Kelly Dahms; 14 Grandchildren; 22 Greatgrandchildren; her youngest sister, Phyllis Archer; her sister-in-laws Judy Dahms and Florence Taylor; daughter of the heart, Lori Mills and many nieces and nephews. Friends and family are invited to call on Saturday, December 28, 2019 between 9:30 and 10:30 AM at Molden Funeral Home, 133 Otter Street, Bristol, PA with a service to follow at 10:30. In lieu of flowers, donations can be made to Boys Town (www.boystown.org), The Michael J Fox Foundation for Parkinson's Research (www.michaeljfox.org), or the charity of the donors choice.

Jean Louise Dahms (Swayne) passed away Saturday, December 21, 2019 surrounded by her loved ones. She was 88 years old. Jean was born January 18, 1931 in Pennsauken, New Jersey, in the home owned by her parents, above the family's hardware store.... View Obituary & Service Information

The family of Jean L. Dahms created this Life Tributes page to make it easy to share your memories.

Send flowers to the Dahms family.