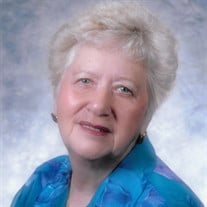 Jeanne E. (Goodman) LaPolla, of Levittown, PA, passed away Sunday, June 11, 2017 at St. Mary Medical Center. She was 84. Born in Croydon, PA she was a lifelong area resident. She was a graduate of Bristol High School Class of 1951, received her associates’ degree in Music Education from Bucks County Community College in 1971 and studied at the Trenton Conservatory of Music. She taught Piano, Organ and Voice privately for many years. She also performed with the Trenton Civic Opera Company and many local musical theater venues including the Sandbox and Headley Manor Dinner Theater as well as managing the Tow Path Dinner Theater. She was also a soloist for the Atlantic City Symphony and performed with the Delaware Valley Choral Society, the Delaware Valley Philharmonic and the Ecumenical Chorale. She had served as secretary for the Emerson Elementary School PTA. Vice President of the Violetwood Women’s Club and the Travel Club of Bristol which was part of the Federated Women’s Club. She had also been a Cantor at Immaculate Conception Church in Levittown for over 30 years. She and her husband Nick were also known for their yearly Christmas parties. Wife of the late Nicholas T. LaPolla, she was also preceded in death her parents Reuben and Corella Goodman and her brother Thomas Goodman. She is survived by three children, Carol Anne Herzek (Frank), Michael T. LaPolla and Sandra Gindlesberger, a sister Corella Wehe (John), 6 grandchildren, Anna, Nicole, Melvin, Maria, Alexis and Ashley, 15 great grandchildren and several nieces and nephews. Family and friends are invited to attend her viewings on Thursday, June 15, 2017 from 7-9pm and Friday, June 16, 2017 from 10-10:45AM at St. Ann Church 357 Dorrance St. Bristol, PA 19007. Her funeral mass will follow Friday at 11AM. Interment is private. To sign the online guestbook or send a condolence visit www.moldenfuneralchapel.com

Jeanne E. (Goodman) LaPolla, of Levittown, PA, passed away Sunday, June 11, 2017 at St. Mary Medical Center. She was 84. Born in Croydon, PA she was a lifelong area resident. She was a graduate of Bristol High School Class of 1951, received... View Obituary & Service Information

The family of Jeanne E. LaPolla created this Life Tributes page to make it easy to share your memories.

Send flowers to the LaPolla family.