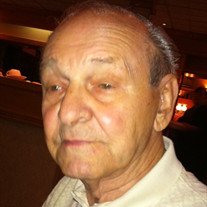 JOSEPH F. EHRENREICH, Sr. resided in Croydon, PA, (formerly of Palmyra, NJ.) He passed away peacefully in his sleep on Thursday, February 13, 2020, at St. Mary's Medical Center at the age of 87. Joe was born in Philadelphia, PA and later his family relocated to Croydon. He was a graduate of Northeast Catholic High School, as well as, Ryder College. He was a Korean War veteran. He retired from Thiokol, were he worked as an Aerospace Engineer for more than 45 years. For a portion of his life, he owned and helped operate Lincoln's Luncheonette in Palmyra, NJ, which was family-owned for over 30 years. Joe enjoyed dancing, playing poker, traveling, along with spending time with family and friends. He was affable, and had a charming and witty personality which made him light up a room. He enjoyed watching westerns on television, as well as historical shows- he was quite the history buff. He also enjoyed reading books. He never stopped learning new things-- especially things that challenged him intellectually-a trait he passed along to his children. He is survived by: his daughter, Bonnie Jo Chellman (John Weber); his son Joe, Jr. (Adina); grand-daughters: Cheryl, Jill and Wendy; grandson: Travis (Kristy); great-grandson: T.J.; nephew and nieces: Ross, Marlene, Beverly, Jennifer, and their spouses and children; brothers: Jim Callan and John Callan; his long-time companion: Joan, and many cherished friends. He was preceded in death by: The Love of His Life: Gloria Ehrenreich; daughter, Kathy Ann Myers; son: Donald E. Myers; parents: Joe and Emma; sister: Marlene. Relatives and friends are invited to attend his Home Going Service on Saturday, February 22, 2020, Viewing 9-11am at Molden Funeral Chapel and Cremation Service, 133 Otter St., Bristol, PA 19007 ; Funeral Service will follow at 11am; Interment at Resurrection Cemetery, Bensalem, PA. In lieu of flowers, memorial contributions may be made to Shriner's Hospital for Children.

JOSEPH F. EHRENREICH, Sr. resided in Croydon, PA, (formerly of Palmyra, NJ.) He passed away peacefully in his sleep on Thursday, February 13, 2020, at St. Mary's Medical Center at the age of 87. Joe was born in Philadelphia, PA and later his... View Obituary & Service Information

The family of Joseph F. Ehrenreich Sr. created this Life Tributes page to make it easy to share your memories.

Send flowers to the Ehrenreich family.