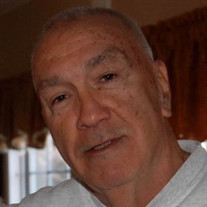 Joseph Allen Jones, affectionately known as Doc, passed away on April 21, 2020. He was born in Fallsington, PA to the late William and Lillian (nee Bertles) Jones. Doc missed his parents dearly and visited the cemetery every year on their birthday. He met his beloved wife Fern when she was only 14 years old; they were married for 56 years. Not only was he her husband, he was her best friend and they did everything together. Fern's fondest memory of Doc was him tying her to a tree at age 15 so he could kiss her. Doc worked at Art Kraft Container Corp. as a forklift operator. He started working there after graduating high school and was employed for 50 years before his retirement. Doc never missed a day of work. An avid sports fan, Doc played baseball, basketball, and football. His biggest joy in life was watching sports on TV, coaching his children, and watching his children and grandchildren play sports. Everyone in the community spoke of him as being the #1 fan at his grandchildren's sport events. He loved nature, specifically lakes, animals, and any wildlife. He was known for taking long walks on nature trails and especially enjoyed walking in the snow. He was also an avid reader of the local newspaper and would read the entire paper from start to finish, everyday! Doc's motto was "If you're happy...I'm happy." He was well known for his gentle nature; he never raised his voice and would do anything for anyone. Most of all, Doc's family meant everything to him. He always enjoyed spending time with them and he will be deeply missed. He is predeceased by his grandson, Robert Jones, Jr. and siblings, Betty, Jean, Marge, Ginny, Judy, Bill, and Jerry. He is survived by his beloved wife, Fern J. Jones; sons, Thomas Jones (Regina) and Bob Jones; grandchildren, Peyton, Nolan, Liana, Andrew, Sophie Jones, and Tiffany Norton (Paulie); siblings, Bob Jones (Midge), Jim Jones (Rita), and Barry Jones (Lillian); special family members, nephew, EJ Floyd (Carla), sister in law, Audrey Edden (Dave), and brother in law Bernie Beese (Linda); and many loving nieces and nephews. Due to current gathering restrictions, a memorial service will be held at a later date.

Joseph Allen Jones, affectionately known as Doc, passed away on April 21, 2020. He was born in Fallsington, PA to the late William and Lillian (nee Bertles) Jones. Doc missed his parents dearly and visited the cemetery every year on their birthday.... View Obituary & Service Information

The family of Joseph A. Jones created this Life Tributes page to make it easy to share your memories.

Send flowers to the Jones family.