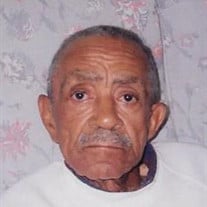 Junious Newman was a loving husband, father & grandfather. He took his final flight to be with his master. God loved him so much that at 6:00pm on Saturday, August 18th, he sent an angel to come and take him home, and when he did, the lights flickered through the house-only for a moment, but in that moment we all knew that he was resting in the arms of God. Junious was born in McBee South Carolina, to the late Charlie and Sarah Newman on May 25, 1926. From their union, seven children were born- Rufus, Exodus, Thomas, Luetta, Rubin, Josephine (all whom Proceeded him in death) and Junious who was the baby. He entered the Navy in 1944 where he served 2 years in WWII. Upon returning, he engaged his longtime sweetheart Pauline Murphy. The two were united in Holy Matrimony on July 7, 1950 and from their union they were blessed with one daughter Patricia Newman. They were married for 68 beautiful years. He was a devoted, hardworking husband, father and grandfather who worked 37 years for the Naval Aviation Development Center, where he retired in 1988. He spent his remaining years praising the Lord at Community Baptist Church under the guidance of Pastor Randall Joseph Wright. He leave behind to mourn his loss, his most precious gift, the love of his life, Mrs. Pauline Newman, his treasured daughter Patricia Newman, five grandchildren- Wynona Newman, Tasha Newman, Julius Newman, Fredric Newman (Nakia), Russell Newman (Tamika), twelve great grandchildren, six brother in laws, on sister in law, a special adopted daughter Kelly Fields, a special granddaughter Jeanette Jackson, a host of nieces and nephews, and countless numbers of God children that were all number one in his heart. To my family and friends, I’m sorry I could not say goodbye to you but I hope you understand, I have gone away with Jesus. He has a better plan; I will not be the last to go. There were many more. Just be ready when he comes so you can get in the door. I’ve made my bed in heaven and now it’s time to rest and we know what God does. He does for the best. Please don’t worry about me, you must carry on. Just remember, God claimed his own. Sorryfully, The family

Junious Newman was a loving husband, father & grandfather. He took his final flight to be with his master. God loved him so much that at 6:00pm on Saturday, August 18th, he sent an angel to come and take him home, and when he did, the lights... View Obituary & Service Information

The family of Junious Newman created this Life Tributes page to make it easy to share your memories.

Junious Newman was a loving husband, father &amp; grandfather. He...

Send flowers to the Newman family.