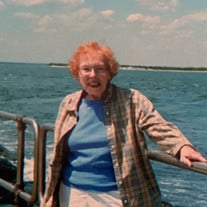 Karen Davidson Wilson of Tullytown, Pennsylvania died Friday. She was 75. She was diagnosed with an inoperable brain tumor in May. Karen Virginia Davidson was born in Wilmington, Delaware and was the daughter of Dr. Lester G. Davidson and Mary Virgina Shuck, both educators. Her father was an English professor and her mother was a Phd candidate in English. Her maternal grandfather was principal of Ocean City (NJ) High School and later superintendent of Salem County (NJ) Schools. She was also proud of her paternal grandfather, David Kristian Davidsen, a Norwegian immigrant, whom she said gave her flaming red hair. While education was always in the forefront of her life she also was an accomplished journalist, public official and lobbyist for various endeavors. Ms Wilson was a National Honor Society graduate of Penns Grove Regional High School where she played basketball and worked on the school paper and yearbook. She attended The University of Florida's Journalism program and later graduated from the Charles Morris Price School of Journalism in Philadelphia. Kate, as she like to be called, also graduated from Bucks County Community College and Trenton (NJ) State College majoring in English literature. She later returned to school to obtain teaching credentials at Trenton State where her mother attended. Ms Wilson student taught and was a substitute teacher in several districts in Lower Bucks County. During her journalism career she was Women's and Features Editor of the Penns Grove (NJ) Record; Editor in chief of the Lambertville (NJ) Sun; contributor to the New Hope (PA) Gazette and the Bristol (PA) Pilot. Ms Wilson also wrote features for Accent Magazine, the Sunday section of the Bucks County Courier Times in Levittown, PA. She also wrote for various regional magazines including Bucks County Panorama. In addition to her newspaper and magazine career, she was a copywriter and later was promotions manager at The Westminster Press, Philadelphia, the publishing arm of the Presbyterian Church in Philadelphia. Her other passion was politics and public affairs. Kate's earliest political thrill was attending the 1964 Democratic Convention in Atlantic City. She was a committee person in the 9th Ward of Bristol Township (PA) for many years where she lived and later was elected and served on the Bristol Township School Board and was also appointed as the official recording secretary to the Bristol Township Council. Kate also served as President of the Lower Buck Vocational Technical Joint School Board. She was an ardent community organizer and promoter of causes. An early member of the local chapter of NOW she later became President and treasurer of the local chapter of the Pennsylvania Women's Political Network. In addition, she was national director of Children of Aging Parents; public relations coordinator of The New Jersey Association of Counties and The Lower Bucks Chamber of Commerce. Ms Wilson was an early proponent for the construction of a new library in Levittown. She was President of the Friends of the Levittown Library and spoke at its dedication. Over the years she organized many book fairs and flea markets to raise funds for the new library. She was a deacon and member of the Northminster Presbyterian Church. Ms Wilson is survived by three cousins. Kathleen Lower of Georgia, Susan Lower Kunze of South Carolina and Bruce Hannah of New York. Kate is also fondly remembered by brother in law Robert Wilson of Upper Chichester, PA and Jackie and Bill Wilson of San Miguel de Allende, Guanajuato, Mexico and numerous friends and colleagues. Funeral arrangements are under the direction of the Molden Funeral Chapel and Cremation Service.

Karen Davidson Wilson of Tullytown, Pennsylvania died Friday. She was 75. She was diagnosed with an inoperable brain tumor in May. Karen Virginia Davidson was born in Wilmington, Delaware and was the daughter of Dr. Lester G. Davidson and Mary... View Obituary & Service Information

The family of Karen D. Wilson created this Life Tributes page to make it easy to share your memories.

Send flowers to the Wilson family.