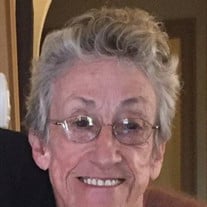 Marianne "Sis" Powers (Grafenstine) passed away at her home on February 3rd, due to pancreatic cancer. She was 76. She was the wife of Richard Powers, with whom she celebrated 48 years of marriage last August. Born in Croydon, she was the daughter of the late Marie and Bill Grafenstine. Early in her career as a nurse, she worked at Moffett’s Nursing Home in Bensalem and then at a nursing home in Darby caring for priests and nuns. Later, she was a Bus Aide for Bristol Twp. Schools for 20 years. Sis was a member of St. Thomas Aquinas Church in Croydon and was a member of the Friends of St. Francis Home for Children since 1973. She was also a member of the Bristol Twp. Senior Center. She enjoyed playing cards and board games and was an avid reader. One of 11 children, Sissy loved being part of a big family. She took pleasure in hosting summer picnics, holiday dinners, showers, christenings, weddings, and family parties just for fun. Sissy's adventurous side was iconic to her younger siblings. She introduced them to the Jersey shore, swimming at Cedar Lake, camping in the Poconos and put several of them 'behind the wheel' in preparation for their 16th birthdays. Once her kids were grown, Sissy enjoyed traveling with Richard abroad and at home. Sis was compassionate and caring. She easily opened her heart and home, and quietly helped those around her. Sissy was a great wife, mother, grandmother, daughter, sister, aunt, and friend. In addition to her husband, she is survived by her three sons, Rick (Jen), Bill (Pam), Tim (Amy), daughter-in-law, Andrea, grandchildren Brian, Vincent, Jenna, Josh, Evan, Emma, five brothers and six sisters. Family and friends are invited to attend her memorial visitation on Saturday, Feb. 9, 2019 from 9-10AM at St. Thomas Aquinas Church Chapel, 601 Bristol Pike, Croydon, PA. A Memorial Mass will immediately follow at 10AM. The family would like to thank Holy Redeemer Hospice and her sister Karen May for all of her kindness. In lieu of flowers, contributions may be made to the Friends of St. Francis Home for Children C/O Richard Powers, 401 Harris Ave., Croydon, PA 19021 “You nourished our bodies and souls. We love you so much.”

Marianne "Sis" Powers (Grafenstine) passed away at her home on February 3rd, due to pancreatic cancer. She was 76. She was the wife of Richard Powers, with whom she celebrated 48 years of marriage last August. Born in Croydon, she was the daughter... View Obituary & Service Information

The family of Marianne E. "Sis" Powers created this Life Tributes page to make it easy to share your memories.

Marianne &quot;Sis&quot; Powers (Grafenstine) passed away at her home on...

Send flowers to the Powers family.