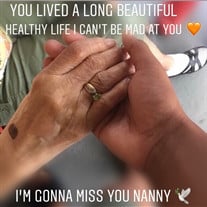 Marceline M. Cox was born August 26, 1922. She transitioned from earth to glory on Thursday, February 22, 2018. Marceline was affectionately called "Sister" by her brothers, sisters and friends. After the birth of her first grandchild, she became known as "Nana." Marceline was the second of five children born to the late James and Annie Neil Monroe of Gibson, NC. Marceline was educated in her early years in Gibson, NC. Her family later moved to New York City where she continued her education and graduated from the New York School District. On May 16, 1943 Marceline married the late James I. Cox, to this union one child was born. Marceline held several jobs until she began to work at Franklin Simone's department store, where she retired. She was baptized at St. Mark's the Evangelist Roman Catholic Church in New York City, where she served as a Eucharistic minister and other various ministries within the church. Due to her health she moved to Pennsylvania with her daughter, but her membership remained at St. Mark's. Marceline was awarded by the Archdiocese of New York as an honored and outstanding Elder. Marceline was very active in the community and the civic groups and she received several certificate of appreciation service to Children with Special Needs, Project Care and the Department of Parks and Recreation of New York City. She also received recognition for her service on the Advisory Committee to the Tenant Association where she lived. Marceline was the matriarch of the family and she showed her family the importance of love and putting God first. Marceline and Cox leaves to mourn, her loving daughter and caregiver, Yvette R. Garner of Levittown, PA; one sister, Nina Mae Crawford of Atlanta GA; one granddaughter Mona Lewis of Ruskin FL, one great grandson Keyonn who preceded her in death; 6 great-grandchildren, Keisha, Shanna, Rickina, Chanel, Breanna, and Kori; 13 great-great grandchildren and a host of relatives, nieces, nephews, cousins and friends.

Marceline M. Cox was born August 26, 1922. She transitioned from earth to glory on Thursday, February 22, 2018. Marceline was affectionately called "Sister" by her brothers, sisters and friends. After the birth of her first grandchild, she became... View Obituary & Service Information

The family of Martha Marceline Cox created this Life Tributes page to make it easy to share your memories.

Send flowers to the Cox family.