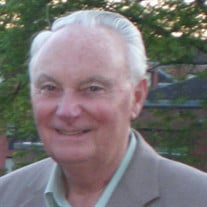 Nicholas J. Moran passed away Sunday, January 20, 2019 at home in Levittown, PA with his wife by his side after a long battle with Alzheimer’s and Dementia. He was 82. Born in New York City he moved to Croydon at the age of 12 and has resided in Levittown since 1964. He was a Land Surveyor, starting his career with Harry Lee in Morrisville then with William Major in Bristol, landing at J.G. Park, where eventually assumed ownership and operated for many years before retirement. He was a member of the PA Society of Land Surveyors and the Levittown-Bristol Kiwanis, as well as a longtime supporter of the Cystic Fibrosis Foundation. He was a member of Harriman United Methodist Church, serving on the Board of Trustees. He was also an Air Force Veteran serving in Turkey. He enjoyed sports and played basketball for the Air Force and played baseball for the Croydon Comets in his youth. He was an avid golfer and a fan of all the Philly sports teams, but never gave up his love of the NY Yankees. Nick had great love for the Christmas Holidays and was affectionately known as “Jolly Old St. Nick”. He was preceded in death by his parents Nicholas and Winifred Moran, his Father and Mother-in-law, Lou and Isabelle Litten and his daughter Kelly Moran. He is survived by his wife of 59 years Beverly (Litten) Moran, 2 daughters Barbara (Bobbie) Moran-Enke (John) and Tracy Moran and 2 grandchildren, Sean and Sarah Enke. Family and friends are invited to attend his viewings on Friday January 25, 2019 from 6-8pm at the Molden Funeral Chapel and Cremation Service 133 Otter St. Bristol, PA and on Saturday January 26th from 9 to 9:45 AM at Harriman United Methodist Church 1700 Wilson Ave. Bristol, PA. A service will follow at 10AM at the Church. Interment, Rosedale Memorial Park. In lieu of flowers, contributions may be made to Harriman United Methodist Church. A special Thank You goes out to the Angels from Kindred Hospice and Family and Friends for their incredible support during these past several years. To sign the online guestbook or send a condolence visit www.moldenfuneralchapel.com

Nicholas J. Moran passed away Sunday, January 20, 2019 at home in Levittown, PA with his wife by his side after a long battle with Alzheimer&#8217;s and Dementia. He was 82. Born in New York City he moved to Croydon at the age of 12... View Obituary & Service Information

The family of Nicholas J. Moran created this Life Tributes page to make it easy to share your memories.

Send flowers to the Moran family.