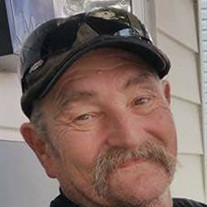 Robert "Bob" Allen Freudenberger, Sr., died peacefully on June 6, 2017 in Bristol, PA, after a sudden infection; he had had a prolonged battle with several ailments in as many years. Bob, aged 66, was also known with affection as Bobby and Fruit. Bob, the son of John R. Freudenberger of Tamaqua, PA, and Violet V. (nee Frederick) of Fleetwood, PA, was born January 11, 1951 in Reading. He was a longtime Bristol resident, graduating from Bristol High School (1968). From 1969 – 1975, Bob was in the US Army (E4, 11 Bravo 10), 36th Engineer Brigade, as a Motor Transport Operator, trained in Ft. Benning, GA and Ft. Polk, LA, and operating in the Rhineland-Palatinate, Germany. Bob's chief job in life was operating semi-trailer trucks, but he was known for being proficient in many trades before retiring. He was an active member of the BPO Elks Lodge #970 of Bristol, PA. Bob is survived by his wife of 48-years (m. 1969), Gail Freudenberger (nee League), of Bristol, PA; children, Robert II (Chrissy) of Levittown, Charlene "Charlie" Litz (Timmy) of Croydon; and Leah Vitale (Michael) of Bristol; sisters Linda Sutor (John) of Levittown, and Lori Plakis (Tony) of Pennsburg; and 9 grandchildren: Shyenne, Skyler, Sage, Cierra, Layla, Ione, Frank, Claire, and Gabriel. He was predeceased by both parents and one sister, Sharon Freudenberger. Bob was loved by many nieces, nephews, and an extended family of relatives and friends. Bob was an automobile and motorcycle enthusiast, passionate about music, Philly sports, NASCAR, and the History Channel. He had a signature cackle that made those around him laugh nearly as much as his brazen jokes. Most of all, Bob loved his family; he will be missed always. Per Bob's will, there will not be a public viewing or funeral; he chose cremation. Interment will happen at a later date at a veteran's cemetery becoming of his military background. Instead, Bob wished for celebratory affair and Wake that will take place at the BPO Elks Lodge #970 at 95 Wood St., Bristol, PA 19007, on Thursday, June 15th. Attendees can beginning arriving between 6:30-7PM; there will be an Elks Lodge of Sorrow (a ceremony of remembrance) at 7:30PM. In lieu of flowers, donations toward expenses incurred from loss of life and his Wake can be sent to Gail Freudenberger at 648 Pine St., Bristol, PA 19007; please convey all written condolences to the aforesaid address.

Robert "Bob" Allen Freudenberger, Sr., died peacefully on June 6, 2017 in Bristol, PA, after a sudden infection; he had had a prolonged battle with several ailments in as many years. Bob, aged 66, was also known with affection as Bobby and Fruit.... View Obituary & Service Information

The family of Robert Allen Freudenberger, Sr. created this Life Tributes page to make it easy to share your memories.

Send flowers to the Freudenberger family.