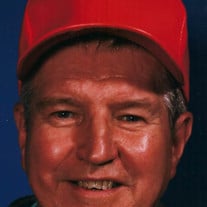 Robert L. Oestreich , age 91, of Levittown, PA, passed away on July 1, 2020 at home surrounded by his loving family. He was born in Ashland, PA and was a graduate of the Ashland High School Class of 1946. Robert proudly served in the US Marine Corps and was also a drummer for the US Marine Corps band. Robert was a member of Emmaus Road Lutheran Church (formerly called Resurrection Lutheran Church). He was not only an active member of the congregation but also taught Sunday School for many years. He retired from the USPS after 35 years, where he worked as an indoor distribution clerk. During his career with the USPS, Robert held positions including both President and Treasurer for the Postal Workers Union. Retirement for Robert did not last long, as he continued to work driving a school bus until he was 85 years old. He enjoyed driving the school bus and especially loved the years he had driving children with special needs. Robert was an avid gardener, outdoorsman and world traveler. He enjoyed camping and hunting with his family. Robert will be deeply missed. Robert is predeceased by his beloved wife, Eleanor Oestreich; mother, Marcella Oestreich (nee Bye); father and stepmother, Leroy and Ida Oestreich. He is survived by his sons, Robert Oestreich (Kathy) and Richard Oestreich (mother of his children, Linda Cunicelli); grandchildren, Heidi Bratt, Robert W. Oestreich, Kristalynn Oestreich, Jennie Marie Oestreich, Matthew D. Oestreich, Ryan Daniel Oestreich, Jesse Dylan Oestreich, and Nicholas Jordan Oestreich; 8 great grandchildren; and cousins, Emmett Gallagher, Bill Lewis, and Jim Gallagher. Relatives and friends are invited to attend his viewing on Thursday, July 9, 2020 from 10am-11:30am at Molden Funeral Chapel and Cremation Service, located at 133 Otter St., Bristol, PA 19007. A funeral service will begin at 11:30am at the funeral home. Interment will follow at Sunset Memorial Park in Feasterville, PA. In lieu of flowers, memorial donations can be made in Robert's name to the American Diabetes Association by visiting diabetes.org.

Robert L. Oestreich , age 91, of Levittown, PA, passed away on July 1, 2020 at home surrounded by his loving family. He was born in Ashland, PA and was a graduate of the Ashland High School Class of 1946. Robert proudly served in the US Marine... View Obituary & Service Information

The family of Robert L. Oestreich created this Life Tributes page to make it easy to share your memories.

Send flowers to the Oestreich family.