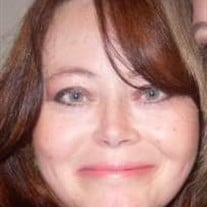 On January 5, 2020, Sherry Lee Schuler nee Talley, loving mother, step-mother, step-grandmother, sister, niece, cousin, and friend left this world. Born in Bristol on March 15, 1963 to Kenneth and Eileen (Dahms) Talley, she grew up in Levittown, lived in Bensalem, Morrisville, and most recently Philadelphia. Sherry was known for her kind heart and beautiful soul. She loved animals, was a pop culture trivia guru, enjoyed interior design and worked for many years at Giant Food Store. Her proudest achievements were her children. She also was a second mom to many with her welcoming and compassionate spirit. She is survived by her children, Ronald Schuler (fiancé Amanda Direnzo) and Ashlee-Rose Ferguson (partner Vladimir Nekrutenko); step-children, Nicole (Anthony) Bocchinfuso, Jason Schuler, and Courtney Orpin; step-grandchildren, Lorenzo Filippini, Oliver, Nelson, and Elizabeth-Virginia Bocchinfuso, Deklyn and Cary Jr. Davish; sisters, Doreen Talley and Brenda (James) Winters; nieces, Marrah Winters (partner Kevin Anesetti) and Eleni (Christian) Kelly; great nieces, Audree Winters and Bailey Kelly, and many aunts, cousins and dear friends that were like family. A memorial service to honor Sherry's life will be held on January 11, 2020 at 11am at Molden Funeral Chapel and Cremation Service, located at 133 Otter St., Bristol, PA 19007. Family and friends may gathering from 10am-11am at the funeral home. In lieu of flowers, the family suggests a donation in Sherry's honor be made to Women's Humane Society in Bensalem, Trenton Cat Rescue, or a charity of your choice.

The family of Sherry Schuler created this Life Tributes page to make it easy to share your memories.

Send flowers to the Schuler family.