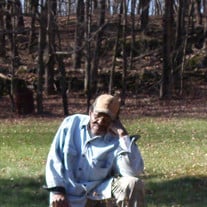 Simon Phillips, 81, of Bristol, passed away on Tuesday, February 22, 2022, at his home. He was born on September 20, 1940, in Douglas, Georgia to the late Simon Phillips and Carrie (McNair) Phillips. He was raised in Pottstown, Pennsylvania. Simon proudly worked for the State of Pennsylvania for 26 years until retirement. Simon and his wife; JoAnn (Bailey) Phillips have spent 24 years together, 14 of which happily married. Throughout his lifetime, Simon, who was affectionately known to many as "Bro", had a passion for motorcycles, all fishing styles, gun collecting and watching western movies. He would often be found tinkering in the basement at "Simon's Bait & Tackle". Simon's favorite get-away was R-Camp in Equinunk, PA. There he would spend countless hours mowing fields and fishing. R-Camp trips were full of adventure but highlighted by the time spent there with his grandchildren. Simon was predeceased by his son; Joel Wilson, his siblings; Eddie Lee, Lamar, Kemp, Johnny and Ocie Phillips. He leaves behind, to cherish his memory, his wife; JoAnn, his children; Todd Phillips and his wife; Tonya, Timothy Phillips and his wife; Barbara, Virgil True and Janine Phillips-Weber and her husband; Michael Weber, his sisters; Carrie McAlpine, Virginia Young, Marianne Brownie and Marji Ree Saunders, 15 grandchildren; 9 great-grandchildren; as well as a host of loving family members and friends. A memorial gathering will be Saturday, March 5, 2022 from 10:00am -11:00am at the Molden Funeral Chapel & Cremation Service, 133 Otter St., Bristol, PA, 19007. A funeral service will follow at 11:00am at the funeral home. Cremation will be private. In lieu of flowers, memorial contributions may be made in Simon's honor to: WildlifeLeadershipAcademy.org For online condolences, visit www.moldenfuneralchapel.com

Simon Phillips, 81, of Bristol, passed away on Tuesday, February 22, 2022, at his home. He was born on September 20, 1940, in Douglas, Georgia to the late Simon Phillips and Carrie (McNair) Phillips. He was raised in Pottstown, Pennsylvania. Simon... View Obituary & Service Information

The family of Simon Phillips created this Life Tributes page to make it easy to share your memories.

Simon Phillips, 81, of Bristol, passed away on Tuesday, February...

Send flowers to the Phillips family.