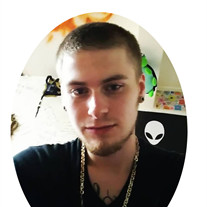 Taylor Thomas Grist of Croydon, PA passed away Wednesday, April 3, 2019. He was 21. Born in Croydon he was a lifelong area resident living in Penndel, before moving back to Croydon. Taylor was employed by Belmont Telecommunications. He loved Skateboarding, Dirt Bikes and Quads. He loved fishing at the Sweet Spot on the Neshaminy Creek. He loved animals, especially his cat Rumbles. He wrestled when he was in school and developed the “Grispy Roll”. He enjoyed collecting guns and weapons. Taylor was very loving and extremely protective of his family, especially of his sisters. His greatest love and impenetrable bond will always be that of his mother. From the moment of his birth, their bond was impenetrable. He is survived by his parents Shelly C. Beck and Darren E. Grist, his sisters Brittanee Boushell (Gregory Ziminski, Jr). and Storme Grist, his grandparents Sharen and Harry Beck, his nephews Greggy Ziminski III and Greyson Ziminski, his aunt Cindy Burns (Kevin) and uncles Don Grist and Bruce Wallen, his cousins Clark White, Lala Klett (John), Kelly White, Ciara Sheehan, Bob B Cap, and Nicky Caputo. He is also survived by his fiance’ Brittney S. Kubat, his second father and boss, Peter Alosi and his boss Anthony D’Amelio. Taylor was preceded in death by his Grandparents Edward and Charlotte Grist and his uncle Harry Beck III. The family has asked that white or black bandannas be brought or worn in Taylors Memory Family and friends are invited to attend his viewing on Saturday, April 13, 2019 from 2pm until the time of his service at 4pm at the Molden Funeral Chapel and Cremation Service 133 Otter St. Bristol, PA. In lieu of flowers contributions may be made a trust fund for his 2 nephews online at https://www.gofundme.com/f/taylorsnephews or checks made payable to Brittanee Boushell. To sign the online guestbook or send a condolence visit www.moldenfuneralchapel.com

Taylor Thomas Grist of Croydon, PA passed away Wednesday, April 3, 2019. He was 21. Born in Croydon he was a lifelong area resident living in Penndel, before moving back to Croydon. Taylor was employed by Belmont Telecommunications. He... View Obituary & Service Information

The family of Taylor Grist created this Life Tributes page to make it easy to share your memories.

Send flowers to the Grist family.