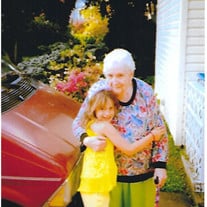 Thelma L Clausen received her wings on Wednesday, November 1st, 2017. The Mom had a little more than 92 successful orbits around our star. She was born in Philadelphia, July 21, 1925 and has lived in Levittown since 1952 when her and The Dad... View Obituary & Service Information

The family of Thelma L. Clausen created this Life Tributes page to make it easy to share your memories.

Send flowers to the Clausen family.