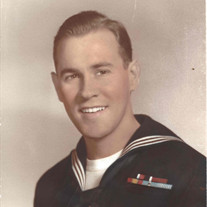 Thomas W. Donnelly, longtime resident of Bensalem, passed away peacefully on Saturday evening, April 25th, after a brief but brave battle with COVID-19. Born in 1928, and raised in Bristol through the economic chaos of the 1930's, he nonetheless began "pushing a broom" at the Rohm & Haas Chemical Company on his 16th birthday. Tom often remarked that his mother rousted him out of bed and told him to not come home until he'd found a job. He spent his entire professional career at R&H, retiring as a research scientist at the Spring House Labs. Tom met the former Ms. Mary Ann Dement on a September evening in 1948 while attending a dance with his pals aboard the Delaware Belle, embarking from the wharf in his native Bristol. They courted over most of the following two years, visiting Mary at her home in Burlington. They crossed the well-known bridge between the two towns so often that the attendants promised them free passage on their wedding day - a promise kept. Over their 65-year marriage, Tom and Mary navigated their way through Tom's hitch in the Navy during the Korean Conflict, four children, a night school college degree in biology and numerous travels both domestic and abroad. Volunteering played a key role in Tom's life. He devoted many evenings calling bingo games at St. Ephrem hall, served as scoutmaster for Troop 82 in Penndel, earned a Red Cross swim instructor qualification, and later, together with Mary, helped with countless Red Cross Blood Drives. Judging by his many stories and penchant for attending reunions throughout the country, Tom relished his Navy hitch aboard the Lake Champlain - "The Champ". A photo album containing snaps of Tom in his crisp dress white crackerjacks at the Great Buddha in Japan, on the steps of the Parthenon in Athens, and at Singapore's Tiger Balm Gardens served as an inspiration for his children to travel and see the world, particularly the spots he had visited. The camaraderie of the Ancient Order of Hibernians ("the Hibo's) in Bristol, just around the corner from his childhood home, drew Tom to the clubhouse on Corson Street for many years. He encouraged friends and family to enjoy Wednesday afternoons and Friday evenings, sipping Miller High Life, shooting Jaegermeister, enjoying Irish music and exchanging stories of childhoods spent in and around the wards of Bristol. Tom was a lifelong Philly sports fan, and relished in the Sixers' championships, the Phillies' two World Series titles and of course the Eagles' inspiring Super Bowl LII victory. After retiring, he and Mary made great use of planes, trains and automobiles, taking them across the country and the far corners of the world, visiting their children living in Europe, cruising the Mediterranean and traveling to Australia and Southeast Asia. Accomplishments and volunteerism aside, his greatest joy came from the love he shared with Mary and their children, grandchildren and great granddaughter. He particularly enjoyed time spent with them on the dock at Lake Wallenpaupack, pulling up bluegills and bass for breakfast! Many families have been affected by the scourge of COVID-19. Most frustrating for Tom's family is knowing that an otherwise healthy 91-year old sweet soul spent his last days isolated in a nondescript room at St. Mary hospital, in the absence of his loved ones. We encourage all to abide by CDC guidance in order to minimize pain and suffering for other families. We also ask that you make a donation to a local food bank in Tom's name to help those who are going hungry as a result of this awful pandemic. Tom's deep faith in the Lord comforted him throughout his life, and he was actively involved in St. Ephrem Parish where he continued to go to Mass each Sunday. Tom was the loving son of the late Joseph and Mary Donnelly. Tom was predeceased by his loving wife of 65 years, Mary, his effervescent son-in-law Alan Fielding, his bother Joe and sister Mary Neill. He was the loving father of Mary E. Fielding (Alan), Claire M. Swift (Butch), Thomas M. Donnelly (Tammy) and Michael D. Donnelly (Susan). He is also survived by nine cherished grandchildren, Cameron, Megan (Rick), Caitlin, Aileen, James (Gerri), Kelsey, Colleen, Maggie and Michael. Tom was also the loving great-grandfather of Megan and Rick’s Allie with whom he spent last Thanksgiving and Christmas. Tom also leaves behind many nieces and nephews along with his loving brother Larry and his dear sister Betty Kornstedt who lives just a few doors down the hall. Tom is also survived by his dear friend for the last years, Elaine Blecker. Tom, Betty and Elaine were close pals and spent many fun times together at Juniper Village. Tom's family and friends will fete him with a Mass and celebration of life when social distancing has eased, sometime over the next several months.

Thomas W. Donnelly, longtime resident of Bensalem, passed away peacefully on Saturday evening, April 25th, after a brief but brave battle with COVID-19. Born in 1928, and raised in Bristol through the economic chaos of the 1930's, he nonetheless... View Obituary & Service Information

The family of Thomas William Donnelly created this Life Tributes page to make it easy to share your memories.

Send flowers to the Donnelly family.