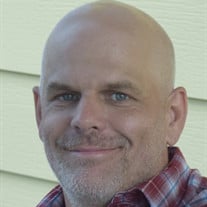 Timothy ("Timmy" to his family and "Tim" to close friends) Ronald MacGorvin died peacefully in his home on October 25th, 2020. Timmy was born on January 2nd, 1978 in Philadelphia, PA. He was the 2nd of 4 children. Timmy was a precocious and curious youth who loved the outdoors. He spent much of his youth climbing trees and catching crayfish in a local creek in his hometown, Bristol, PA. Timmy grew into a passionate and intelligent young man. He loved working with his hands and enjoyed doing origami to pass the time. He also loved video games and often played while his siblings watched, boasting of his superior skills. Later in his life, Timmy became an avid family man and loved nothing more than to spend time with his closest relatives. His daughters, nieces and nephews were his life and he never passed up an opportunity to be with them. Tim also loved his bike. If he wasn't modifying it, he was off riding it somewhere in the wilderness. Timmy had many aspirations, some of which included getting his pilot's license and being a web designer. He was a vibrant 42-year-old that was full of life and we will all miss him terribly. Timmy is survived by: his mother, Patricia Sacerdote; his beautiful daughters, Shannon and Abbi MacGorvin; his older brother, Todd MacGorvin (Joanie MacGorvin); his little sister, Desiree Bunda (Michael Bunda); his little brother, Christian Sacerdote (Mark Ledger); his uncles, Chet Paolini, Tom Paolini, Joe Paolini and Jim Paolini; his aunt, Christine Thurston; his cousins Tommy Paolini, Shawn Paolini, Nicole Paolini and Stephanie Fuerst; his nieces and nephews, Todd MacGorvin Jr., Peyton Bunda, Grey MacGorvin, Julian Bunda, Tessa MacGorvin and Raelynn Bunda. Timmy is predeceased by: his fathers, Ronald MacGorvin and Joseph Sacerdote. Family and friends are welcomed to Timmy's memorial visitation from 11:00am - 1:00pm, followed by service at 1:00pm, Friday, October 30th, 2020 at Molden Funeral Chapel, 133 Otter St., Bristol, PA 19007. Internment to follow at St. Mark's Cemetery. We hope you will join us in celebrating Timmy's life. In lieu of flowers, please make a donation to the Silver Lake Nature Center in Bristol, PA.

Timothy ("Timmy" to his family and "Tim" to close friends) Ronald MacGorvin died peacefully in his home on October 25th, 2020. Timmy was born on January 2nd, 1978 in Philadelphia, PA. He was the 2nd of 4 children. Timmy was a precocious and... View Obituary & Service Information

The family of Timothy Ronald MacGorvin created this Life Tributes page to make it easy to share your memories.

Timothy (&quot;Timmy&quot; to his family and &quot;Tim&quot; to close friends) Ronald...

Send flowers to the MacGorvin family.