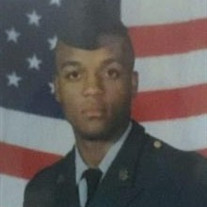 Victor Kameil Banks was born on January 26, 1982 in Bristol, Pennsylvania to Glynett Herbert. As a young child, he was adventurous, outgoing and full-of-life. Growing up, he affectionately became known as 'Kam.' He was raised in the Levittown area, where he graduated from Harry S. Truman High School. While attending Harry S. Truman, he excelled in Track and Field competing at the Penn Relays. After high school, Victor enlisted in the United States Army where he served two combat tours in Iraq. During his 10 years of active duty, he earned numerous medals and awards including a Global War on Terrorism Service Medal, an Iraq Campaign Medal with Campaign Star, and a Combat Action Badge. He was honorably discharged in 2010, but he continued to serve his country as a reservist. During his time in the Service, Victor earned his Master of Business Administration Degree from Touro University Worldwide in 2016, Summa Cum Laude. Victor was "big on family" and in 2004, he welcomed his daughter Kameia LaTeianna Banks. Kameia inherited Victor's competitive spirit and enjoyed bowling, running/racing and riding on his motorcycle. To Victor, Kameia was his "little Princess." With his wife Aimee, Victor shared a son, Quentin Dominic Banks. The two of them enjoyed spending time together playing video games, watching boxing and competing in basketball. Victor had a passion for riding motorcycles and being on the open road. He worked with local organizations where he mentored local youth in boxing, physical fitness and after-school tutoring. In addition to motorcycles, Victor was an avid Philadelphia Eagles fan and found great joy when they won the 2018 Super Bowl. Victor is predeceased by: his grandmothers Roberta Hunter and Dorothy Hadden; great-grandparents, Robert and Gladys Banks; and cousin, Sophia Handy. Victor leaves behind to cherish his memories: his children, Kameia and Quentin; his mother, Glynett Herbert; his nine siblings, Joan Banks, Shauna Banks, Evelyn Banks (Keith Gastearl), Michael Banks (Elizabeth), Jajhira "Kira" Herbert, Andreas "Nikki" Herbert, Jordan Fisher, Antoni Fobbs, and Artist "Art" Hines; his grandfather, Wille Hunter; his grandparents, Gwen Golar-Willis and Robert Willis; his great-grandmother, Doris Smith; his wife, Aimee Banks; his nephew, Logan Banks, with whom he shared a very special bond. He also leaves to cherish his memories a host of aunts, uncles, cousins, nieces, nephews and friends. Relatives and friends are invited to attend his viewing on Wednesday, September 16th at 9am at House of Prayer church, located at 5628 Fleeting Dr., Levittown PA 19057. A funeral service will begin at 11am at the church. Victor will be laid to rest with Military Honors at Washington Crossing National Cemetery in Newtown, PA.

Victor Kameil Banks was born on January 26, 1982 in Bristol, Pennsylvania to Glynett Herbert. As a young child, he was adventurous, outgoing and full-of-life. Growing up, he affectionately became known as 'Kam.' He was raised in the Levittown... View Obituary & Service Information

The family of Victor K. Banks created this Life Tributes page to make it easy to share your memories.

Send flowers to the Banks family.