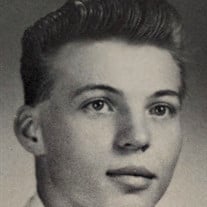 Victor Ivanchenko of Bristol, Pa., passed away in his sleep on Friday December 21, 2019. He was 72. Victor Fyodor Ivanchenko was born on March 25, 1947, in Germany to Lydia nee Novitsky and Fyodor Ivanchenko. Victor was the oldest of 3 boys. Growing up Victor enjoyed hunting, fishing and trapping. He often provided food for his family before school. Victor's Mother would prepare the food for dinner. Victor also enjoyed his annual Hunting trips in Tiogo County, with friends. Victor did not come home empty handed from his Hunting trips. Victor Graduated from Woodrow Wilson High School, Bristol Township. He graduated from Pierce Business School in Philadelphia. Victor has always been an avid Reader. Reading out sections on Hemmingway, Westerns, Cowboys, and many other sections at the library. He always enjoyed reading on the subjects of fishing, hunting, science and nature. In less than a year after graduating High School, Victor was drafted by the US Army. Victor believed that his Grand Mother's prayers kept him out of the Vietnam War. Victor was a Military Police, stationed in the US. One of Victor's primary duties as a MP was to capture deserters. Soldiers escaping from base, often out of fear of being sent to Vietnam. Victor showed much mercy on these frightened soldiers. Victor was employed as a Store Manager at Two Guys, Department Store, Levittown Shopping Center. He worked for Mac, Albumin Siding Company, Trenton, NJ. Working jobs with his Brothers Peter and John in Princeton, Trenton, and Hopewell, NJ. Victor also had his own Siding Business with his Brother John, working primarily in Central Bucks County. Victor worked and retired with Goodnose Family Restaurant, Newtown, Pa. Victor was Preceded in death by his Grand Mother: Anna Novitsky, Grand Father Ivan Novitsky, Mother Lydia Ivanchenko, Father Fyodore Ivanchenko, Brother Peter Ivanchenko and infant son, Kevin. Remaining Family: Son Brian Ivanchenko (Jodi), of Greenville, Wi., Daughter Melissa Ivanchenko, Bristol, Grand Children Lukas and Madison, Brother John Ivanchenko, (Lauren) Bristol, Niece Liana Ivanchenko. Per Victor's wishes, there will not be a public viewing. At a later date there will be a Military funeral at Washington Crossing Cemetery.

Victor Ivanchenko of Bristol, Pa., passed away in his sleep on Friday December 21, 2019. He was 72. Victor Fyodor Ivanchenko was born on March 25, 1947, in Germany to Lydia nee Novitsky and Fyodor Ivanchenko. Victor was the oldest of 3 boys.... View Obituary & Service Information

The family of Victor Ivanchenko created this Life Tributes page to make it easy to share your memories.

Victor Ivanchenko of Bristol, Pa., passed away in his sleep on...

Send flowers to the Ivanchenko family.