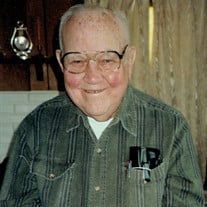 William C. White, Jr., was born to Edna and William C. White Sr., in Philadelphia, PA on February 21, 1919. In 1925, he and his parents moved to Bristol Township, PA. In 1937, he graduated from Bristol, Borough High School. In 1941, he married Aline M. Wright, and they were happily married for 55 years until after much illness and the LORD called her home. Aline and William always worked together and even built their own two-story home on Steele Avenue in West Bristol, PA. By automobile, they toured the U.S.A. and Canada, and one time into Mexico. William worked for Rohm and Haas, Bristol, PA for 44 years, and retired 2/29/1984. For 32 years of that time, he drove a fork-lift truck. In 1943, he entered, the U.S.A. Navy, and had his boot camp training at Sampson, NY. He graduated from Navy Electrical School in St. Louis, MO, basic submarine and Electrical School in New London, CT. Also, he went to gunnery and firefighting school in San Diego, CA. He served aboard the Submarine Tender AS 25 Apollo in Guam with a rating of EM 3 C. Aline and William moved to Holiday City Carefree in Toms River, NJ in 1987. He leaves behind sisters-in-law, Alberta Vasey of Raleigh, NC, Emma Lawrence of Levittown, PA, many nieces, and nephews. He shall be sadly Missed by his LOVE and COMPANION Florence Schank and her children. Also, his friend and neighbor Diane Dill, along with his loving caregiver Sharon Stewart Thompson and the Staff at Home Helpers. Due to COVID restrictions, graveside services will be held Monday, December 28, 2020 at 11:00 at Sunset Memorial Park, 33 County Line Road, Feasterville, PA 19053 . In lieu of flowers, please make donations to Trinity Bible Church, Newport Road, West Bristol, PA.

The family of William White Jr. created this Life Tributes page to make it easy to share your memories.

Send flowers to the White family.